You are here: Home1 / Articles by our Lawyers2 / ask-a-defamation-lawyer

Defamation Lawyer, Gil Zvulony successfully defended an Anti-SLAPP motion for his client. The case involved postings about a real estate agent on WeChat.

An Anti-SLAPP motion seeks to have a legal proceeding dismissed because it is a proceeding that limits freedom of expression on a matter of public interest (Gag Proceeding). Mr. Zvulony was one of the first to test Ontario’s anti-SLAPP legislation in the courts in another case.

The full day motion was argued virtually using Zoom. The judge found in favour of Mr. Zvulony’s client and dismissed the Anti-SLAPP motion.

In his judgment, the judge thanked Mr. Zvulony for the superb quality of his oral and written submissions. The case can be found here: Niu v. Cao, 2020 ONSC 5407 (CanLII), <http://canlii.ca/t/j9kt8>

DISCLAIMER: This description is intended only to provide information about the activities and experience of our lawyers and should not be understood as a guarantee or assurance of future success in any matter.

A video Clip with the CBC is below.

Justin Trudeau threatens to sue Andrew Scheer over comments he made about SNC-Lavalin. So how strong would his case be? We ask defamation lawyer Gil Zvulony @GilZvulony @cbcnews #SNCLavalin #cdnpoli pic.twitter.com/pS3aPGKaZj

The interview with the Post Millennial can be found here:

What are the legal repercussions when someone is the subject of a false and damaging statement in the workplace. Are there any special considerations that apply to the workplace? 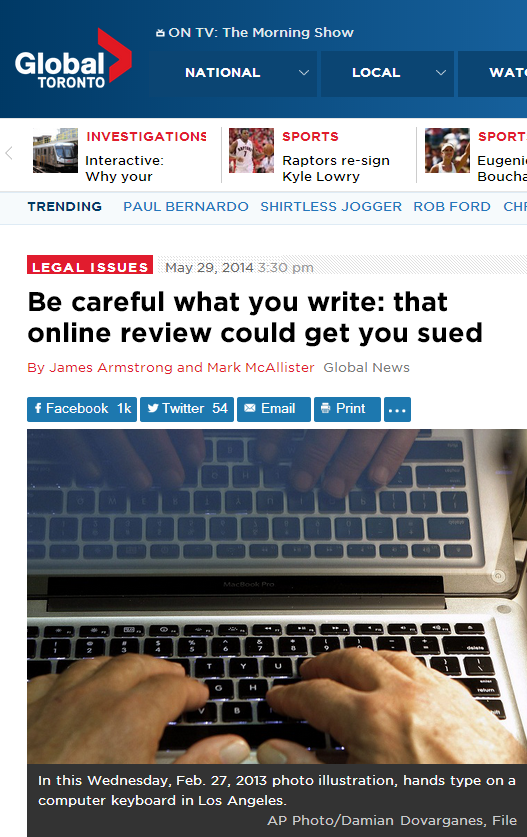 This article explores ten essential tips for dealing with defamation on the internet. It provides some simple and practical advice to people who have been libeled on the internet, including how to determine the severity of the defamation, whether the posting is defamatory, and whether it is worth suing over.

Toronto Internet and Defamation Lawyer, Gil Zvulony sat down with CBC’s Carol MacNeil to discuss the legal issues surrounding negative online reviews on websites such as Yelp and TripAdvisor.  Mr. Zvulony discussed how the law of defamation can apply to online reviews. He gave some practical tips to keep in mind before authoring a negative online review about a company, such as having someone proof-read your post, and limiting your critique to facts you can easily prove. The entire clip can be viewed below.

Gil Zvulony, Toronto Defamation Lawyer, recently spoke to Law Times about the Ontario Court of Appeal’s decision in the defamation case of Foulidis v. Ford.  Gil Zvulony, noted the importance of naming the right parties in a defamation lawsuit, and questioned why certain parties were not added to the lawsuit.

The full article can be found here:

Toronto Defamation Lawyer, Gil Zvulony was recently featured in a story Global News did about online reviews and defamation.  Gil Zvulony gave some tips on writing a good review that could protect a reviewer from a defamation lawsuit.

The article can be found here: http://globalnews.ca/news/1362949/be-careful-what-you-write-that-online-review-could-get-you-sued/

City News recently dropped into Zvulony & Co. to speak to Toronto Defamation Lawyer Gil Zvulony about some dangerous words that should probably be avoided when talking about someone on the internet.  You can see the video below.

It is common practice these days for police departments, and other law enforcement bodies to publish the names of people that have been charged with a criminal offence.  Typically, these press releases are distributed to the media and are then picked up in the press.  For example the RCMP has its own Newsroom section on its website where the public can view the names of people that the RCMP have charged.  These press releases typically persist on the police department’s website and are indexed by search engines.   The end result is that an internet search for the accused’s name yields the news that a person was charged.  The question arises about whether this common practice is defamatory?

The Supreme Court of Canada ( in Grant v. Torstar Corp., 2009 SCC 61 (CanLII)) stated that in order to establish a claim for defamation a plaintiff must establish that:

a) the impugned words are defamatory, in the sense that they would tend to lower the plaintiff’s reputation in the eyes of a reasonable person;
b) the words in fact refer to the plaintiff; and
c) the words were published, i.e., that they were communicated to at least one person other than the plaintiff.

Once the plaintiff has established these elements, falsity and damage are presumed, and the onus shifts to the defendant to advance an appropriate defence to escape liability.  A likely defence in cases of reporting charges or convictions would be the defence of “justification”.  Justification, in law, means that the defendant takes the position that the words published are true and intends to prove it.

Applying the above test we see that in most cases there is no problem by simple publishing a story that someone was charged with an offence; provided that that person was in fact charged.  The law is quite clear in this regard.  Generally speaking, a statement indicating that a person has been charged with an offence is not defamatory because reasonable persons are mindful that an accused is presumed innocent until proven guilty: see Miguna v. Toronto (City) Police Services Board, [2004] O.J. No. 2455 (S.C.) at para. 6, aff’d [2005] O.J. No. 107 (C.A.); see also Sauvé v. Canada,  [2010] F.C.J. No. 887 (T.D.) at para. 27.

An interesting issue arises when a press release goes beyond the simple reporting of charges.  What happens when the press release adds “commentary” and “background” to the press release?  The law states that defamation may still exist if what is reported implies that the accused person has engaged in conduct more serious than the charge or conviction: see M.D. Mineralsearch Inc. v. East Kootenay Newspapers Ltd., 2000 BCSC 1456 (CanLII), 2000 BCSC 1456.

This was one of the issues that the Ontario Court of Appeal dealt with in the case of  TPG Technology Consulting Ltd. v. Canada, 2012 ONCA 87 (CanLII).  The appellants, TPG Technology Consulting Ltd.  were charged under the Competition Act, R.S.C. 1985, c. C-34, s. 47.   The appellants alleged that the charges and the manner in which the charges were announced to the public, “were part of a deliberate and malicious effort by the respondents to discredit and harm the appellants”.  The respondents, the Crown,  argued that they were simply reporting the truth.

The alleged defamatory words that have been disseminated on the Bureau’s website:

As a result of the agreement, the bidders were allegedly able to maximize the rates at which services were to be provided to the various departments.

Some recent studies suggest that in cases where bid- rigging occurs, the price paid for the good or service typically increases by about 20 percent.

The Bureau found evidence indicating that several IT services companies in the National Capital Region secretly coordinated their bids in an illegal scheme to defraud the government by winning and dividing contracts, while blocking out honest competitors.

Bid-rigging is a criminal offence where bidders secretly agree not to compete or to submit bids that have been pre-arranged among themselves.  Their goal is to thwart the competitive tendering process and inflate prices to purchasers.

Bid-rigging charges under s. 47 of the Competition Act. Charges laid against 7 companies and 14 individuals based on allegations that the parties entered into agreements to coordinate their bids in an illegal scheme to defraud the government by winning and dividing contracts for information technology services

The story was picked up in several media outlets.

The plaintiff sued and the crown sought to have the claim dismissed on the grounds that the impugned statements are not capable of bearing defamatory meaning.  The lower court allowed the Crown’s motion and dismissed the claim (see 2011 ONSC 4604 (CanLII), 2011 ONSC 4604, [2011] O.J. No. 3511.  The plaintiff appealed.

The Court of Appeal gave important parameters for reporting that someone was charged with an offence.  The Court stated the following:

[10]      The motion court judge appropriately characterized the issue, at para. 18 of his reasons, as whether the respondents “went beyond simply stating that the [appellants] had been charged with bid-rigging; specifically, did they imply that the plaintiffs engaged in conduct more serious and blameworthy than bid-rigging.”

[11]      A report that someone is under investigation or that they have been arrested for, or charged with, a criminal offence is not considered the “equivalent of saying that the person has committed the crime unless there is something in the language of the report that suggests the plaintiff’s guilt”: Raymond E. Brown, Brown on Defamation, loose-leaf, (Toronto: Carswell, 2011), ch.4 at pp. 4-165 to 4-166; Roger D. McConchie & David A Potts, Canadian Libel and Slander Actions, (Toronto: Irwin Law Inc., 2004) at p. 516.  However, reports of arrest or charges will be capable of conveying a defamatory meaning, “where it is stated, either directly or by clear implication, that an offence has been committed, and the qualifications contained in any of the surrounding statements are not sufficient to outweigh or nullify the effect of what appears to be a plain statement of fact”: Shave v. West Australian Newspapers Ltd., [2000] W.A.S.C. 172 (S.C.) at para. 29.

[12]      A distinction is drawn “between reports which are thought to do no more than state that a person is under investigation or has been charged with a criminal offence” and reports which assert “directly, or by clear implication, that the plaintiff has been involved in acts amounting to a criminal offence”; the former are generally not considered capable of a defamatory meaning while the latter are: Shave v. West Australian Newspapers Ltd., [2000] W.A.S.C. 172 (S.C.) at para. 28; Raymond E. Brown, Brown on Defamation, ch.4 at 4-168.

The ordinary reasonable reader is mindful of the principle that a person charged with a crime is presumed innocent until it is proved that he is guilty. Although he knows that many persons charged with a criminal offence are ultimately convicted, he is also aware that guilt or innocence is a question to be determined by a court, generally be a jury, and that not infrequently the person charged is acquitted.

A distinction needs to be drawn between the reader’s understanding of what the newspaper is saying and judgments or conclusions which he may reach as a result of his own beliefs and prejudices. It’s one thing to say that a statement is capable of bearing an imputation of defamatory of the plaintiff because the ordinary reasonable reader would understand it in that sense, drawing on his own knowledge and experience of human affairs in order to reach that result. It is quite another thing to say that a statement is capable of bearing such an imputation merely because it excites in some readers a belief or prejudice from which they proceed to arrive at a conclusion unfavourable to the plaintiff. The defamatory quality of the published material is to be determined by the first, not by the second, proposition.

The Court then went on to find that it was possible that the words of complained of had a defamatory meaning and therefore the lawsuit should be allowed to continue.  The question of whether the words actually conveyed those meanings, on the other hand, is a question of fact that should not be decided on the preliminary motion that the Crown brought.

Accurately reporting that someone was charged with a crime is permissible.  (Even if legally defensible, the practice of “naming and shaming” raises serious journalistic ethical issues.  See: Dark Consequences of Naming and Shaming  and When accused sex-criminals are exonerated, the media too often goes silent. for a discussion of the broader ethical issues.)  Caution should be taken when reporting background information to avoid the implication that the person charged is actually guilty of committing the crime.

Toronto Defamation Lawyer Gil Zvulony was recently quoted by Global News.  He discussed some of the practical difficulties that victims of online defamation have in getting legal recourse.

He was quoted as saying “[Victims] can pursue it in civil court without question. The practical difficulties for that are sometimes these postings are made anonymously and it’s very expensive to find out who is behind it”.

Defamation victims  do have some relatively inexpensive options.